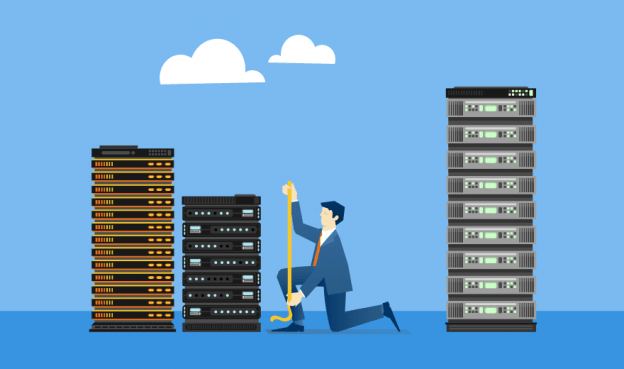 Virtualization is an essential part of cloud computing. Thanks to this technology you can build effective cloud solutions.

Cloud4Y offers a cloud based on VMware virtualization. It is one of the most popular virtual server environments, that provide users with a powerful tool for building and managing cloud infrastructure. In this article, we cover basic things about what is virtualization and the advantages of VMware cloud.

Virtualization is running of a virtual instance of a computer system at a layer abstracted from real hardware. You can virtualize servers, storage, network resources, applications, and desktops.

Another definition of virtualization is running several systems on a single computing machine, with the physical resources of this machine allocated to each virtual system independently. Resources are allocated by the host operating system, a hypervisor that provides guest (virtual) machines with CPU, RAM, storage, and network communications resources from a common resource pool.

Small and medium servers – web server, domain controllers, database server used by up to two-three hundred users – are recommended to migrate to a virtualized environment.

Virtualization is implemented when creating test environments for software products before their release into production. A company does not have to buy or rent new hardware – they can simply use a virtual environment in the cloud to test a new service.

What is server virtualization

Server virtualization is a software-based representation of a physical server. The technology allows running several virtual machines on one physical machine, each simulating a separate server. The software simulation affects the main components of the server: CPU, drive, RAM, and others. Cloud4Y uses VMware to increase flexibility, and scalability while creating significant cost savings.

With VMware virtualization, you can have multiple heterogeneous incompatible applications and servers running on the same hardware simultaneously.

Server virtualization with VMware is particularly effective in DevOps. Virtual servers offer developers isolated systems for testing new applications. Instead of buying a dedicated physical machine, it is possible to create a virtual server on an existing machine. Since each virtual server is independent, programmers can run software without worrying about affecting other applications.

Why Use VMware Server Virtualization

If you ask an IT professional to name a virtualization vendor, VMware is typically the first one mentioned. VMware owns 55% to 85% of the virtualization market and consistently ranks first in terms of functionality, usability, security, and scalability.

Despite competition from such big players as Microsoft and Citrix, VMware still remains leading in server consolidation. It is one of the most powerful virtualization platforms, that has been successfully used in the enterprise sector for over 10 years. Companies that have high requirements for the reliability of IT solutions use VMware cloud.

In some cases, the VMware-based cloud computing service is especially required. For example:

VMware virtual server on the Cloud4y cloud platform will never fail. It will not need to be maintained or upgraded. Any virtual server is regularly backed up; even in the event of a failure, its performance will not be interrupted. Cloud4y runs in a fault-tolerant Tier III data center on high-end hardware equipment and VMware software.

Renting VMware virtual servers (IaaS) allows company not only to save the capital cost in IT investment, but also leads to operational savings, such as reduced labor, and facility costs.

The cloud offers benefits for organizations of all sizes, from improving efficiency and productivity to cost saving. In Cloud4Y, we offer reliable solutions that help to get the most value out of IT investment, and simplify cloud journey. We invest our experience in cloud technologies in every project to build custom solutions that focus on customer needs. Our secure cloud solutions are hosted on high-performance equipment in a modern Tier-III data center, and supported by Service Level Agreements (SLAs).