When a lot of employees are working in 1C at the same time, the program is prone to "lags". The 1C server was created to get rid of this problem and ensure high performance when working with large amounts of information.

The 1C server includes two components: the application server that processes data and the SQL server that stores data. It is compatible with such products as Microsoft SQL Server, Linux PostgreSQL, IBM DB2. The 1C server acts as an intermediary between the database server and the client computers. It performs heavy computing tasks, significantly freeing up client computers.

The concept of "1C server" appeared only after the release line versions 1C 7. Before that, there was just a program 1C, which gradually evolved into a thick client. It worked with its file base.

Many companies still use file-server architectures today, but they have some limitations. For example, it is difficult to organize the simultaneous work of multiple users, the size of the database is limited, and with a large nomenclature, the database simply cannot cope with requests.

An important development was the transition to 1C client-server technology. An experimental SQL version appeared in the 7.7 platform, which used a separate DBMS for storing and managing the database.

In 1C:Enterprise 8.0 there was a division into client and server procedures. Since then, installing and configuring a 1C server has become a regular option.

It is reasonable to adopt this technology for large and medium-sized companies when the file base is no longer able to cope, and a full-fledged DBMS is required. If the organization has one to five 1C users, a typical configuration is enough to support the business processes.

When user sessions more than ten, the local network is overloaded, which greatly slows down the parallel work. For example, if 1C is used by a department of 20 people, plus management and cashiers at the sales outlets. Another example – a wholesale supplier, that might have not so many users, but the range of goods and the list of counterparties are huge. In these cases, server 1C becomes a necessity. 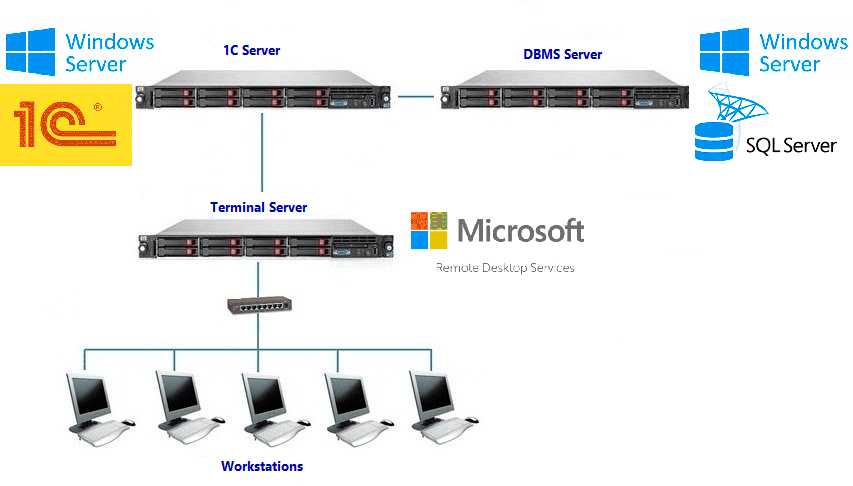 The architecture of the solution can be different, depending on the goals. In general, it includes the following components: 1C: Enterprise server and DBMS server, most often MSSQL or PostgresSQL PRO. These are software servers, which may be located both on physical or virtual servers.

Clients. If you need to run the platform on a PC (for example, when using certain models of trade and cash equipment) – software clients are installed on the working devices. Protection keys are inserted in these computers, distributed over a network by a special program or server 1C.

If you install web-server components on the 1C server (included in Platform 1C), then you will not need clients – you get access via the browser.

Another option – the client program is installed on the same server as the 1C server, or on the "neighboring", and users log in via RDP.

1C server in the cloud

Building an infrastructure for the 1C platform involves a large investment, plus costs for maintenance and upgrades, hiring IT professionals, etc. An alternative solution – rental of infrastructure for 1C in the cloud. 1C server on a virtual machine will cost much less – as this is the IaaS model, you will only have to pay for the resources you use.

Additionally, the client receives high security and confidentiality, as all data is stored in a reliable and secure data center. Daily backups eliminate the risk of losing information. Moreover, even the most highly loaded 1C databases run quickly and smoothly in the cloud, plus if the database is growing, it can be scaled up in a few clicks.

The user has access to the platform from anywhere, which is especially convenient for remote employees and large companies with a chain of branches. No special technical skills are required - simply connect to the database, even from a low-powered PC, and work as usual.

Renting the virtual server for 1C with Cloud4Y

Cloud4Y offers a subscription-based option to work with a full-featured version of 1C. The program is installed on a fault-tolerant cloud server, the client can connect to it via an encrypted Internet channel from any device and from anywhere in the world.

How to use 1C in the cloud? There are three options for implementation:

Connection to a remote server (via MS RDP protocol). 1C server is deployed at the provider's site and connects to the server (if necessary secure connections may be used). The user connects to the remote virtual server via RDP protocol and receives a visualization of what is happening on another computer. All computational processes take place on the server.

App server connection. RemoteApp is a remote application service that provides access to 1C using the RDP protocol. To set up communication between the local computer and the cloud 1C using this method, the remote desktop client is also used. Computational processes are performed on the server using the application. Unlike RDP, the user only has access to the 1C program, not the entire remote desktop.

Accessing via a web browser. With this option, you do not have to install 1C on local PCs. All you need to do is launch a browser and follow the address.

Cloud4Y also provides 1C licenses available for rent. If the company already has the licenses, you can use your USB-keys.

1C server rental service will not only help to save money and optimize your employees' work with the program but also free you from dealing with technical issues related to the maintenance of infrastructure.

What else to read:
18 march Calculating the TCO: Cloud vs. On-premise Infrastructure 22 september 2020 Server Virtualization with VMware 22 july 2020 5 Steps for Businesses to Get Ready for the Law on Personal Data 152-FZ
Popular
05 february Creating an AlwaysON Availability Group Based on a Failover Cluster 10 december 2020 Cloud4U at Gitex 27 november 2020 Black Friday exclusive – get 65 off the IaaS 20 november 2020 Cloud trends for 2021 29 september 2020 Cloud4U at ConnecTechAsia 29 september 2020 Machine Learning in the Cloud – Business Advantages 14 august 2020 Comparison: GDPR vs. Russia's Federal Law on Personal Data 29 may 2020 Who is Responsible for Personal Data Protection Compliance in the Cloud 29 march 2020 Is Private Cloud Right for Your Business? 31 march 2016 New product: Office 365 for rent